After running several companies, Robert Cutshall founded Omega Castings, Inc. in 1975. It was during a gas shortage and Battle Creek, Michigan was picked as a location due to its natural gas reserves. Locating in Battle Creek assured that there would be fuel to run the pre-heaters for years to come. The building selected was a 1930’s era decommissioned military swimming pool, whose tiled walls and filled-in pool lent itself perfectly to the hot-works of a foundry. Today, the pool depth-marks on the walls are still visible.

Over the years, Omega has added a metallurgical laboratory – as well as an in-house machine shop for link and drive drum finishing. In 2006, a heat-treating furnace was added to re-oxidize link castings to improve corrosion resistance. Omega is near its 40th year of operation and continues to pursue its mission of providing customers with the best castings and assemblies to be found in the industry. 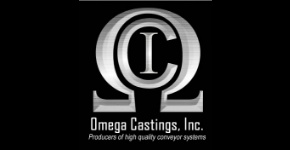